The Amazon: loans to fund virtuous livestock farming and preserve the forest

Science at work 9 June 2022
In the Amazon, it is possible for natural forest and its biodiversity to co-exist with profitable, low-GHG livestock farming. How? By ensuring that cattle graze in the right place, at the right time. This means a change in habits for most farmers, but one that can be funded by means of a "Pecuária Verde" (Green husbandry) loan, an experimental scheme launched by Banco de Amazônia and CIRAD.

TerrAmaz: a new partnership to reconcile the fight against deforestation with development in the Amazon

"The equatorial conditions in the Amazon are well suited to rearing cattle on grass", says René Poccard-Chapuis, a geographer at CIRAD. However, the flip side is that this activity is one of the main causes of deforestation, which affects biodiversity, the water cycle, soils, and climate regulation. However, there are "innovative, easy-to-use practices that could put a stop to those processes", he adds.

This is what prompted Banco de Amazônia*, in partnership with CIRAD and with support from the Agence française de développement (AFD) and its German counterpart the Deutsche Gesellschaft für internationale Zusammenarbeit (GIZ), to launch a new financial product, "Pecuária Verde" (Green husbandry) loans, last November.
The researcher sums up the concept: "This low-interest loan is intended to fund more efficient landscapes, in other words ones that combine natural forest zones and livestock farming zones that produce fodder efficiently. The former address the region's environmental issues, while the latter satisfy farmers' economic needs".

This work is being conducted as part of TerrAmaz, an AFD-funded project to support territories in the Amazon, of which René Poccard-Chapuis is coordinating the Brazilian pilot site in Paragominas.

Virtuous husbandry: a matter of timing

To tackle this challenge, the loans fund the switch to a livestock farming system centring on optimum pasture management. Farmers lower the soil acidity caused be deforestation and burning, by spreading lime. They then sow grass in a large number of plots, staggering the sowing dates. "In the Amazon, grass grows very quickly and in large quantities, thanks to the very high sunshine and rainfall levels", René Poccard-Chapuis observes.

From then on, everything is a matter of coordination. After three weeks, the grass reaches peak nutrient content and digestibility. The next three or four days are ideal for efficient grazing, before a new three-week rest period. The cattle are moved on to the next enclosure, where the grass is now mature.

A practice that benefits farmers, the forest and the environment

The first people to benefit from pasture rotation are farmers: their animals grow faster, thanks to the abundant supply of tender, protein-rich grass. The second advantage of virtuous livestock farming is that it mitigates climate change, in two distinct ways. Since the fodder they eat is easy to digest, the cattle belch less, hence emit much less methane, a greenhouse gas 25 times as powerful as CO2. Moreover, the many, short-lived grass roots rot in the soil, storing as much carbon as in forest soils.

The third benefit is forest restoration. To ensure optimum efficiency, farmers will concentrate on the most favourable parts of their farm and abandon those where fodder production is less efficient: slopes, ravines, and zones liable to flooding. Nature will reclaim its rights. "Experience has shown that the forest fights back very quickly in the Amazon. Forest corridors develop and connect with each other, depending on the topography, which creates an efficient structure for three ecosystem services", René Poccard-Chapuis explains. "On the one hand, biodiversity circulates better and benefits from a quality habitat. On the other, soils on slopes are protected from erosion, which stops watercourses silting up. Lastly, in the dry season, forests in ravines and humid zones transpire more. They help to maintain the relative humidity of the air, which in turn reduces the risk of fires." Forests will therefore be restored in the very places where they are most useful, and local livestock farmers will see their incomes rise.

Loans and practices that must prove their worth

"Livestock farming developed in the Amazon based on minimalist practices. Farmers do not build many, if any, fences to manage grazing, and using fires to eradicate weeds in the dry season causes devastating fires", the researcher adds. "In the end, these green loans are primarily intended for these traditional farmers, but they have to prove their worth first". This is why there will be a one-year pilot phase—co-constructed and co-funded by CIRAD—involving just ten experienced farmers.

After compulsory training, farmers will begin investing in fencing, salt block holders, drinkers, grass seed, new cattle, etc. They will subsequently be supported, and also monitored. To this end, the bank has set up a monitoring-reporting-verifying (MRV) system. "Every two months, the farmers will send the bank photos of how they are managing grazing. Each year, a technician paid by the bank will visit the farms to do more in-depth checks. Lastly, there will also be continuous satellite monitoring", René Poccard-Chapuis explains.

This fully transparent approach will serve to measure the agronomic, social and environmental performance of the new practices, hence of the loans. "Lastly, the initial selection of farmers and the monitoring system will prevent any primary forest deforestation, even if the State authorizes it", he stresses.
It is still too soon to judge the effectiveness of this innovative financial product. Nevertheless, René Poccard-Chapuis is confident: "If farmers in the Brazilian Amazon are convinced of the merits of such good practice, they will produce more meat, in more organized landscapes. Their carbon balance will become positive, and provided it is sufficiently so, farmers will be able to trade on it."

* Banco da Amazônia manages funds specified in the Brazilian constitution in 1988, fuelled by a tax levied in the southern and southeastern states (the most developed). Those funds are used in the form of subsidized loans to fund development in the poorest regions, such as the Amazon. 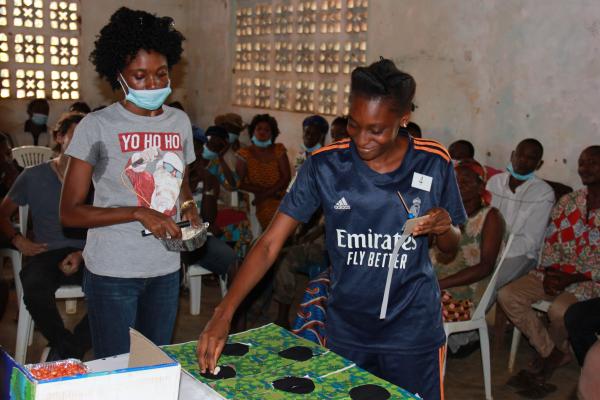 Building a geographical indication for weda from Casamance