If we want to carry on eating chocolate, we need to change how we grow cocoa!

Science at work 14 April 2022
Current cocoa growing systems do not satisfy the requirements of most producers. They are not sustainable either, in the light of climate change. What with poverty, deforestation and diseases, the cocoa value chain needs to change urgently. In the run-up to Easter, take a (fresh) look at CIRAD's work to foster sustainable cocoa growing.

Global cocoa consumption is constantly rising. However, productivity per farm remains low and variable from year to year. The overall rise in output can therefore be put down to the new areas planted, which are generally in forest zones and thus contribute to deforestation. "In Ghana, the world's second largest cocoa producer, we estimate that a quarter of the deforestation observed between 1990 and 2008 was a consequence of cocoa growing", say Martijn ten Hoopen and Stéphane Saj, cocoa value chain correspondents at CIRAD.

Over and above concerns about sustainability and preserving biodiversity, the low productivity of cocoa growing systems makes producers socioeconomically vulnerable, and indeed often extremely poor, particularly in West Africa.

"The predominant model, monoculture plantings, has reached the end of the road", Martijn ten Hoopen stresses. "What with the ageing existing cocoa plantations, some of which have been abandoned, the increasing scarcity of available forest zones, and the fact that diseases spread more quickly in monocultures… Not to mention the growing lack of zones suitable for cocoa, in the wake of climate change. Cocoa growing needs a revamp."

Cocoa was originally an understorey tree in the Amazon rainforest, sensitive to changes in temperature and requiring constant humidity levels. This is why it appreciates the shade and soil humidity found in agroforest systems. In Cameroon, CIRAD and IRAD have demonstrated that agroforestry is a viable alternative to cocoa monoculture, in terms of productivity, soil health and carbon sequestration, and the lifespan of cocoa trees. Moreover, the trees grown alongside cocoa boost producers' incomes, notably in the case of fruit crops (avocado, citrus, mango, banana, plantain, etc.). 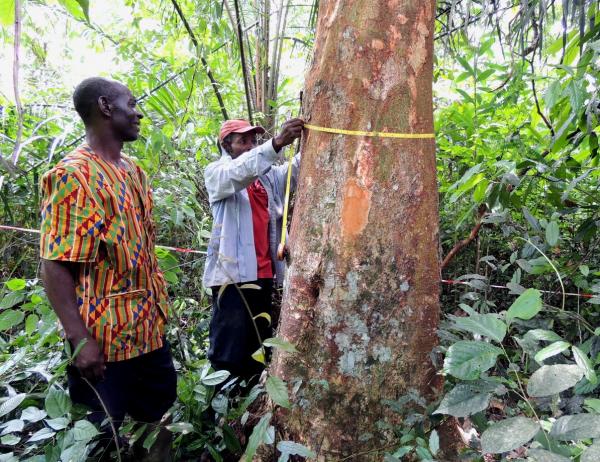 Although pure cocoa crop stands remain the dominant model in Africa, they are running out of steam. A series of studies by CIRAD and IRAD in Cameroon showed that cococa-based agroforestry systems can provide a credible alternative to cocoa monocultures. By means of an indicator used in silviculture, the researchers were able to determine the ratio of cocoa trees to other species that strikes the best trade-off between yield, carbon storage and sustainability. The indicator could be adopted for sustainable cocoa certification purposes. This work is the subject of the latest issue of Perspective.

Inventing the cocoa systems of the future

Ivory Coast and Ghana account for 43% and 20% of global cocoa production respectively. In those countries, the Cocoa4Future project is assessing the agro-environmental resilience of 150 cocoa plantings, both monocultures and agroforest plots. Within the next four years, the project should have developed new cocoa growing systems that are both sustainable and more beneficial for farmers.

Cocoa4Future: putting people and the environment back at the heart of cocoa growing

Making cocoa growing in West Africa more sustainable and resilient... this is the task set for the Cocoa4Future project, coordinated by CIRAD and funded by the EU DeSIRA programme and the Agence Française de Développement. Over five years, more than 150 monocrop or agroforestry cocoa plantings will be assessed from an agro-environmental point of view, while 350 farms in Ivory Coast and Ghana will benefit from support for new farmer strategies, notably as regards agroforestry. The different project partners* have just signed a consortium agreement.

Sustainable cocoa growing is also an issue for consumer countries

France, which is 20th on the list of cocoa consumer countries, has committed to change in the sector, with the launch in October 2021 of the French sustainable cocoa initiative, which fits in with the French National Strategy to Combat Imported Deforestation. The initiative rests on three commitments: improved incomes for cocoa producers; a ban on French cocoa imports from deforested areas; and an end to forced labour and child labour in producing regions.

On 5 October 2021, the French government represented by the Secretary of State for Biodiversity, Bérangère Abba, the Syndicat du Chocolat (French chocolate trade union), CIRAD, NGOs and retailers signed joint and decisive commitments towards sustainable cocoa, with the participation of the Minister Delegate for Foreign Trade and Economic Attractiveness, Franck Riester.

Between 40 and 50 million people worldwide (including 5.5 million smallholders) rely on cocoa production, which currently totals 5 million tonnes a year. Some 70% comes from the "West African cocoa belt", which stretches from Ivory Coast to Cameroon. Europe, the world's largest consumer of this black gold, has a processing industry with an annual turnover of 62 billion euros.

Giving visibility to pastoral activities in Senegal: a question of justice