The New Africa-France Summit and Montpellier Global Days, highlighting the partnerships at work in training, research and innovation

Event 27 October 2021
On 8 October 2021 in Montpellier, the New Africa-France Summit was attended by over 3,000 African and French participants, bringing together numerous scientists and partners working on both continents, including CIRAD. It was the culmination of the Montpellier Global Days organized by Montpellier University of Excellence and its partners, a week abounding in discussions and meetings that illustrated the intensity and merits of these partnerships for training, research and innovation.

Interview with Alioune Fall on RFI, on the issues surrounding agricultural development in Africa (27th minute)

CIRAD was present at the New Africa-France Summit in the Higher Education, Research and Innovation zone.

Partnership, the keystone of CIRAD’s activities, at the heart of the New Africa-France Summit

The opportunity for the organization to share its partnership expertise, one of its specificities, notably concluded Elisabeth Claverie de Saint Martin, CIRAD CEO, during the session on commitments to “Taking action and building the future together”, centring on testimonials from agencies funding basic research, action research and development.

For Aldo Stroebel, Executive Director Strategic Partnerships at the National Research Foundation of South Africa, “it is our collective approach that will determine our future as regards structural policies, investments, etc. to take up challenges, notably for the environment” According to Mr Stroebel, it is particularly necessary to “promote knowledge to increase the existing potential for excellence on the African continent and invest in multidisciplinary missions”.  Thierry Damerval, President of the French National Research Agency (AFD), also highlighted the need to increase synergies between research funding agencies, to co-design support programmes for projects responding to relevant needs, notably on a regional scale. Lastly, for Sarah Marniesse, head of the AFD Innovation Campus, partnership is not a matter of how we can, but how we must: “it is only through dialogue and the enrichment of multicultural partnerships that we’ll manage to see the world differently”. In her view, academic partnerships are needed, but open partnerships with civil society as a whole even more so.

Watch the full session on higher education, research and innovation at the New Africa-France Summit (in French)

The Montpellier Global Days, organized by Muse I-SITE and its partners, including CIRAD, were held ahead of the summit. Joint research and partnerships between the research communities in Montpellier and Africa were illustrated with testimonials from numerous partners in Africa and Montpellier on six main topics: agroecological transitions, food systems, biodiversity, international health and One Health, water and new technologies to feed, protect, care. Over a hundred African partners were invited.

Along with Institut Agro, and including CGIAR and AFD, CIRAD notably ran the agroecological transition days, the main conclusions of which were shared with the assembly of the Higher Education, Research and Innovation (ESRI) zone during the summit.

Training, co-production of actionable knowledge, organizational innovations and the marketplace were at the heart of these days, focusing on testimonials from African partners and young professionals, including, Julie Matovu, an organic farmer in Uganda for whom “participatory guarantee systems can contribute to agroecological transitions”, or Aimé-Felix Komlan Dzamah, an agronomist at Sichem/AgroDR and Ecovie, for whom “the challenge for Africa is agroecological intensification”.

The days also provided the opportunity to take another look at the movement for an agroecological transition in Senegal (DyTAES), notably with a dedicated photographic exhibition.

Lastly, a half-day was devoted to sustainable cocoa. This very rich session notably showed that a revaluation of smallholder incomes is inevitable for more sustainable and more responsible cocoa production.

Montpellier Global Days: co-construction and training are a core part of agroecological transitions

Ahead of the New Africa-France Summit, the Montpellier Global Days consisted of two days of talks on agroecological transitions, led by CIRAD with Institut Agro. The discussions covered the research-training-innovation-incubation continuum and involved some thirty African partners. We look back at these inspirational exchanges, with some of the participants.

Food systems in need of transformation

CIRAD actively participated in the days devoted to Food Systems, and to International Health and One Health.

Both family- and industrial-scale food systems are currently unable to meet SDGs in a satisfactory way. In particular, they are the world’s main cause of declining biodiversity and are responsible for a third of GHG emissions.

Industrial food systems in particular have helped to increase production faster than population growth, but they are increasingly revealing their environmental, social and health limitations. For those attending the global days, they need to be transformed to cope with several challenges.

On the one hand, it is a matter of sustainably feeding urban areas. The global days highlighted innovations presented by numerous producer organizations and processing microenterprises, concerning the quality of foods adapted to consumer demand. It is important that they receive the backing of public authorities through funding and training. School meals are also strong leverage, as illustrated by the Ma cantine autrement (My other school canteen) project developed in Montpellier, which is generating some promising partnerships, notably with Senegal.

Employment is another challenge for Africa, with almost half the population under 30 years old, for whom the agriculture and agrifood sectors can offer opportunities, notably given the digital revolution.

Lastly, the environment with agroecological transition, which plays a role in both mitigation and adapting food systems to climate change. This challenge, like that of school catering, is supported by two coalitions set up at the UN Food Systems Summit held last September.

Co-construction of projects and results, a guarantee of success for the One Health approach

On international health and One Health issues, CIRAD has been active through several projects it is coordinating or jointly leading:

The common thread of these research and development projects is the co-construction of projects and their results by integrating all stakeholders, including political, from the outset, in countries from both the global South and North. This is a true paradigm shift: research is no longer carried out for those countries, but with them. For CIRAD, it is also a guarantee of obtaining significant and sustainable results, notably for take‑up by beneficiaries on the ground.

Technologies to Feed - Care - Protect: the ambition of cutting-edge research in partnership

In a context of global change, using new information, data and algorithms is of notable benefit for managing farming systems, surveillance, early warning, and health risks.

CIRAD, as an expert in these fields, is working with its African partners and other organizations of excellence as part of the #DigitAg Digital Agricultural Convergence Lab.

CIRAD also works for and promotes responsible and low-cost digital agriculture, for the benefit of all forms of farming, notably family farming and agroecology in tropical and Mediterranean countries.

An illustration of this is the SoYield application, based on imaging and artificial intelligence, developed in collaboration with the Franco-Moroccan company SOWIT. Benefiting from the skills developed by CIRAD in the PixFruit project, it is used to measure, estimate and forecast mango yields per tree, or in an orchard.

ILikewise for the Sigatocare application, a Cirad’Innov® solution developed in partnership with the ITK company to control black Sigatoka disease of banana.

Water management: fully including the young generation of African scientists within the international communities

Water was also a key subject during these global days ahead of the World Water Forum to be held in Dakar in March 2022.

Irrigation and agriculture, protection of water courses, salinization, pollution, human requirements, aquatic and marine ecosystems, etc: all aspects of water entail difficult challenges, notably regarding climate change and growing urbanization. Here again, participatory approaches and the need to involve the different stakeholders are ever present in the management of water and territories. The day, organized by the UNESCO International Center for Interdisciplinary Research on Water Systems Dynamics in Montpellier, revealed the importance of fully including the young generation of African scientists within the international scientific communities, to take up these challenges together. For the scientists “it’s already urgent, the time for talking is over”.

CIRAD also contributed to the days devoted to biodiversity, and to its role as much in the functioning of wild ecosystems as in agroecological transitions. In particular, the role of agroforestry systems needs to be analysed and taken into account in biodiversity preservation. Several African partners presented their joint work on the structure, functioning and management of tropical forest ecosystems.

CIRAD also contributed to the imported deforestation topic. Around 1/3 of annual forest losses are linked to international trade in agricultural products. No longer importing products involving deforestation would help reduce forest losses each year, along with the associated biodiversity. Some leads for solutions already exist and were discussed during the global days.

Imported deforestation: how Europe contributes to tree loss worldwide, and what we can do about it

Banning imports of products resulting from deforestation would considerably reduce forest loss year on year. But it is not as simple as it looks. An article published on The Conversation explains the complexity of what is now known as imported deforestation and the concepts associated with it, and suggests solutions.

Alongside the New Africa-France Summit, CIRAD was honoured by the visit of Jean-Yves Le Drian, Minister for Europe and Foreign Affairs, to the Montpellier centre.

Elisabeth Claverie de Saint Martin, CIRAD scientists and African students from partner research organizations were able to dialogue with the minister on subjects such as sustainable food systems, agroecological solutions in the Sahel and partnerships with African nations, through some tangible examples of targeted research.

During the visit, Jean-Yves Le Drian also discovered the Abiophen greenhouse, a high-tech facility used to test the adaptation of plants to climate change. He talked with the research team about the Great Green Wall Accelerator, in which CIRAD is involved.

On 6 October in Montpellier, CIRAD, INRAE, IRD and Institut Agro – alongside representatives of the Prefecture and the Occitanie Region, and Michaël Delafosse, President of Montpellier Méditerranée Métropole and Mayor of Montpellier – inaugurated two facilities that will play a major role in the adaptation of crops to climate change. The first, ARCAD, a genetic resources centre, contributes to conserving Mediterranean and tropical crop diversity, which is essential to plant breeding in the context of the agroecological transition. The second, the AbioPhen greenhouses, simulate future climate conditions. 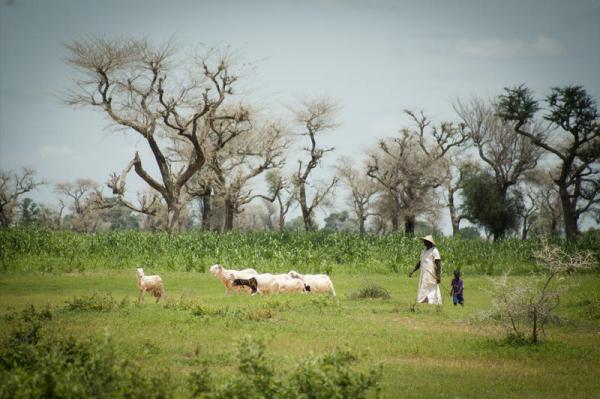 The vast Great Green Wall project was given a new lease of life at the One Planet Summit a fortnight ago. As CIRAD researchers pointed out, the success of this colossal pan-African initiative hinges on consulting local people and tailoring operations to the territories concerned. Below are three examples of projects aimed at fighting land degradation in the Sahel that satisfy those requirements.

Agriculture and climate: a mixed bag of results from COP27