Can tropical forests stand the heat? Yes, but only up to 32°C

Results & impact 22 May 2020
Tropical forests face an uncertain future due to climate change. New research published in Science on 21 May suggests they could continue to store large amounts of carbon in a warmer world, provided countries limit their greenhouse gas (GHG) emissions to keep daytime temperatures below 32°C. The study, coordinated by the University of Leeds, involved an international team of 225 researchers, including four from CIRAD.

Forests and Societies Ecology of the Forests of French Guiana

Tropical forests currently store the equivalent of a quarter of a century of carbon dioxide emissions. However, global warming could push that figure down if tree growth were to slow down or tree mortality rates to rise, in turn further accelerating climate change. The international research team behind the study measured more than half a million trees in 813 tropical forests worldwide. The aim was to assess the amount of carbon stored in those forests, which grow in a range of different, changing climate conditions. Their results showed that tropical forests are still a major carbon sink, despite recent temperature increases. However, "we now know that as things stand, the amount of carbon stored by these forests is stable up to a daytime temperature threshold of 32°C. Above that threshold, carbon stocks fall very significantly", says Bruno Hérault, a tropical forest specialist with CIRAD's Forests and Societies research unit and co-author of the study.

The current "maximum 2°C" rise stipulated in many international climate agreements would push many tropical forests worldwide over the 32-degree threshold. "If we limit global average temperatures to a 2°C increase above pre-industrial levels" , this pushes nearly three-quarters of tropical forests above the heat threshold we identified", says lead author Dr Martin Sullivan, from the University of Leeds and Manchester Metropolitan University. "Any further increases in temperature will lead to rapid losses of forest carbon."

The danger, if the threshold is exceeded, is that forests could in turn become net carbon emitters. Any excessive rise in temperatures would substantially reduce forest productivity while increasing tree mortality, and when the amount of carbon gained through tree growth is less than that lost through tree mortality, forests release more carbon dioxide than they capture. As Martin Sullivan stresses, each degree increase above this 32-degree threshold releases 51 billion tonnes of CO2 from tropical forests into the atmosphere.

These results corroborate previous work by CIRAD in French Guiana, Europe's largest tropical forest*. As Bruno Hérault explains, "in the forests of the Guyana Shield, temperature is also clearly a determining factor in the evolution of forest functioning, with the possibility of a 40% fall in their average productivity according to current climate scenarios" .

To calculate the change in carbon storage, more than half a million trees of 10 000 species were measured in 24 tropical countries. The global team of 225 researchers pooled several decades of field observations in South America, Africa and Asia. The data, gathered in plots sometimes several days away from any human infrastructures, are proof of the devotion of field teams, who often work in very basic conditions, and of the long-term support provided by the organizations in charge of the operations.

"The CIRAD Paracou field station in French Guiana was used for the study. More than 70 000 trees have been measured regularly at the site since the early 1980s, providing a valuable dataset for understanding the changes under way in tropical forests as a result of human activity", says Géraldine Derroire, a CIRAD researcher with the Ecology of the Forests of French Guiana joint research unit (UMR ECOFOG). 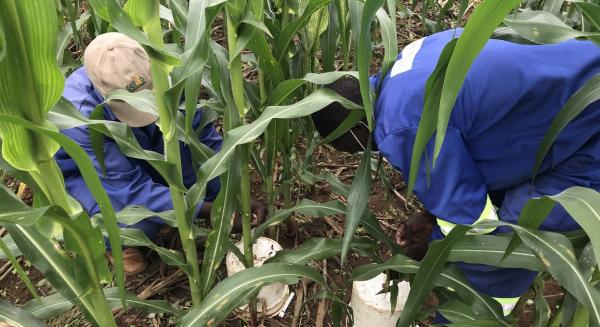