In Senegal, scientists and veterinary services are working hand in hand against the tsetse fly

Impress ex post case study 23 June 2021
In sub-Saharan Africa, tsetse flies spread diseases that are lethal for both humans and animals. In Senegal, CIRAD worked with ISRA and the country's veterinary services to adapt an existing technique aimed at eradicating the tsetse fly by releasing sterile males in infested zones. The scientists involved used a modelling tool to simulate the impact of their work between now and 2030. There should be a direct impact on herd health, and that impact could subsequently be broadened to encompass other diseases and new livestock farming practices.

The full case study (in French)

Tsetse fly bites transmit a parasitic illness caused by trypanosomes. In humans, they cause "sleeping sickness", which affects the central nervous system. It results in sensory impairments, and can kill if not treated.
In cattle, the disease, which can also be lethal, generally causes a drop in fertility and weight loss. This means a drop in meat and milk production and weakens affected animals, which can no longer be used for draught or transport.

For all the above reasons, tsetse flies have been a core research topic for more than 40 years. CIRAD and the International Atomic Energy Agency (IAEA) laid the foundations in the 1970s of the sterile insect technique (SIT), which aims to sterilize and thus eradicate wild populations. Control campaigns in the 1970s and 80s served to reduce vector population levels, but failed to eradicate the insect. Residual fly populations built up again, and the disease reappeared, becoming one of the main obstacles to livestock intensification.
The 2000s saw the launch of the Pan-African Tsetse and Trypanosomosis Eradication Campaign (PATTEC), and in 2007, Senegal's central veterinary service and the IAEA launched an eradication project in Niayes, in the Northwest of the country.

The project leaders pinpointed a particularly severely affected target zone.
The first step was the genetic characterization of the tsetse fly population in the zone, by gathering entomological and genetic data. During this phase, methods developed by researchers from the Institut sénégalais de recherches agricoles (ISRA) and CIRAD enabled significant progress, for instance by cutting sampling costs during the identification of the target population by more than 90%.
The project continued with soecioeconomic studies and herd surveys, which served to draft an eradication strategy. Since 2012, teams have been analysing tsetse fly behaviour, population density, spread, the impact of insecticides, and so on.

Optimizing a tried and tested technique

The programme uses radiation to sterilize male flies, which reduces overall population levels in a given zone. In zones that have previously been treated against tsetse flies, releasing sterile males subsequently wipes out any remaining wild flies by making the last remaining females sterile.
Prior to its use in Niayes, two projects – one in Burkina Faso and the other in Zanzibar – had demonstrated the feasibility of eradication by means of this technique.
The Niayes project is an opportunity for the researchers from CIRAD, ISRA and the IAEA to improve and optimize the sterile insect technique, notably by releasing sterile males automatically, from a drone.

The programme is also innovative in terms of its organization, with a coordination unit comprising both scientists and veterinary service staff. The unit meets each month, enabling it to respond quickly to any issues encountered during the eradication project.
The programme benefits from funding subject to the success of each phase. The IAEA funded the feasibility study between 2007 and 2010, and the pre-operational phase in 2011.
Based on the results, it classed the project as a priority under its peaceful uses initiative (PUI), a decision that has led the US State Department to contribute to subsequent stages, from 2012 onwards. Some 30% of the budget is earmarked for operational research.

Scenarios to achieve the desired impacts

The project is still ongoing, but researchers have already used a modelling tool to simulate its impact between now and 2030, based on numerous data gathered on its health, socioeconomic and environmental impacts.
Researchers initially built scenarios based on experiments in Zanzibar in the 1990s and detailed surveys of a dozen or so livestock farmers in Niayes.
They suggested that eradicating the tsetse fly in Niayes may foster innovation on livestock farms, to free farmers from the need to rely on trypanosomosis-tolerant but less productive races. Under this scenario, allowing them to use new, more productive races will also allow them to reduce herd size, a major issue given the degree of land pressure in the region.
A participatory workshop and a focus group with livestock farmers will serve to validate the researchers' hypotheses, and above all to fine-tune them by determining the speed at which the scenarios should effect change.
This collaboration between researchers and farmers has also made it possible to take account of other factors affecting the development of livestock production in the region: land pressure, theft, and cattle deaths as a result of plastic ingestion.

To measure the impacts of the project while it is still ongoing, regional veterinary services have adapted their practices and researchers and development staff communicate regularly.
The eradication of the tsetse fly is the fundamental intermediate impact of the project, but not the only one. An entomological surveillance system has confirmed the reduction in the tsetse fly population density, which has in turn already reduced disease incidence, measured by monitoring three "sentinel herds" annually. It has also been demonstrated by the surveys conducted during the project and the participatory workshop.
A socioeconomic survey has also already demonstrated two significant impacts: a reduction in the proportion of trypanosomosis-tolerant races within herds, and a reduction in farmed areas. The largest herds have also shrunk somewhat, while smaller herds have expanded. Similar surveys will be conducted in future to monitor these impacts, and the sentinel herds will continue to be monitored.
The project has also had a substantial impact in institutional terms, thanks to the establishment of the coordination unit involving researchers and veterinary staff. This structure has led veterinary services to change how they operate, and they now adapt their operations in line with the state of progress on the project and are working to build skills.

The sterile insect technique and its use against the tsetse fly in line with the principles of the project have already been rolled out to other countries, such as Ethiopia. They have also served to draft a new mosquito control strategy that should benefit the entire planet.
The projet has also prompted veterinary services and researchers to step up their collaboration on the fight against other animal diseases (Rift Valley fever, African horse sickness and peste des petits ruminants).
Lastly, the project is helping to promote the peaceful use of nuclear science worldwide. 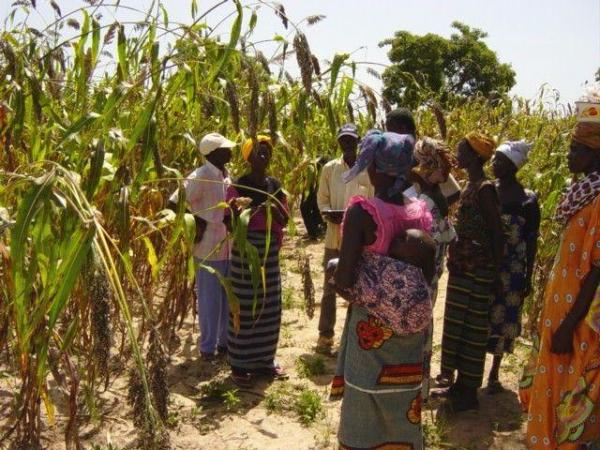 Participatory sorghum breeding in Burkina Faso: with and for farmers

In the mid-1990s, sorghum breeders in Burkina Faso adopted a new varietal creation method: participatory breeding. It is based on the simple principle of associating producers at every stage of research projects. We look back at an innovation that has shaken up farmers and researchers' habits.